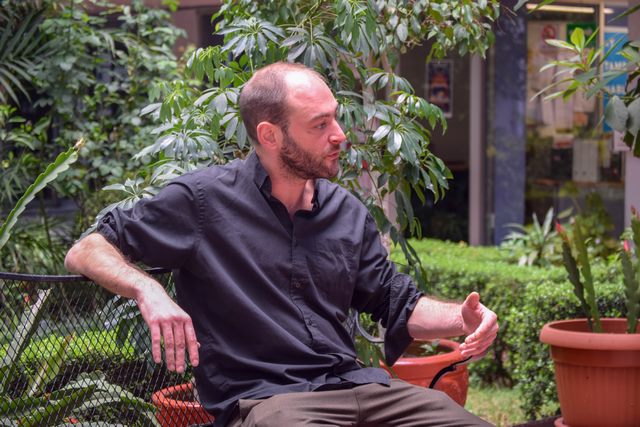 Vincent Lavergne is an architect, urban planner and the founding partner of the office VL-AU. He was born in Paris in 1982 and graduated from the École Nationale Supérieure d’Architecture of Paris La Villette. He co-founded the Nadau Lavergne office in 2008 and the Vincent Lavergne office in 2017 in Paris. In 2012, he won both the Albums des Jeunes Architectes award and the Palmarès des Jeunes Urbanistes award.

Leading a team of ten, he takes on many projects both in and outside France. Vincent Lavergne works on the relationships between architecture and the cities’ generative process, but also tackles the political, economic and social phenomena that generate and condition it. In this framework, his design process articulates architecture and urban planning on different scales, while focusing on the adaptation of urban contexts to the new imperatives of sustainable cities’ development.

The office is currently working on several projects such as the construction of La Tour Commune (first wood-structured high-rise building in Paris, 2020), a complex operation of infrastructure and housing in the Ménilmontant neighborhood (Paris, 2019), the transformation of La Cité des Aulnes (Aulnay-sous-Bois, 2022), the modification and raising of La Tour Watt (highest addition of wood-structure storeys in Europe, Paris 2019), and the construction of 270 residential units mixing solid stone and timber building techniques (Rosny-Sous-Bois, 2020). It recently completed the construction of l’Îlot Montjoie (Saint Denis, 2016) which includes 272 individual housing units, a school, a recreational facility and a gymnasium.

Alongside his architecture practice, Vincent Lavergne carries out various research and education activities. In 2009, he started giving lectures at the ENSAPLV and teaching history courses about the city of Paris’ building process at l’École Professionnelle Supérieure d’Architecture et d’Arts Graphiques de la Ville de Paris. From 2015 up until now, he has been teaching Architecture Project at l’Ecole Nationale Supérieure d’Architecture de Paris La Villette. In 2015, he became involved as an editorialist writer in Tous urbains, an urban planning magazine directed by Philippe Panerai and Olivier Mongin, published by Presses Universitaires de France. He is also the president of the Passerelle V organization, which helps young architects entering the job market and supervises their professional training.